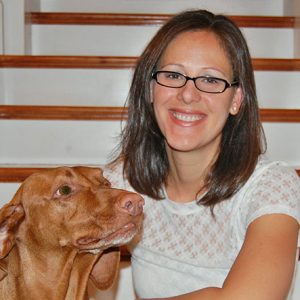 Dr. Jill Patronagio received her B.A. with a major in biology from Augustana College in 1998. She then graduated from the University of Illinois College of Veterinary Medicine, with high honors, in 2002.

A native of Illinois, Dr. Patronagio relocated to New Hampshire upon graduation and practiced at a five-doctor mixed animal clinic in Henniker for ten years before purchasing the Hollis Veterinary Hospital. Dr. Patronagio has substantial experience in both medicine and surgery and has special interests in soft tissue surgery and dermatology.

Dr. Jill Patronagio purchased Hollis Veterinary Hospital in 2012, continuing the tradition of excellence in veterinary medicine while expanding the surgical practice. She leads the HVH team in providing high quality veterinary care and exceptional service to the people and pets of Hollis and the surrounding communities.

She is a contributor to the Hollis Times as well as The Cabinet Press. She is joined in this endeavor by her husband Damian, daughter Hollis, and sons Beckett and Jasper. In her free time, she enjoys hiking, running, and spending time with her family and dogs, Boo and Rueben.

Dr. Jill is pictured here with her dog, Rueben. 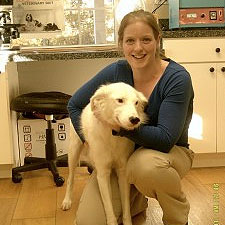 Originally from North Woodstock NH, Kenyon has always had an interest in animals. She graduated from the University of New Hampshire in 2008 with her BS in Wildlife Management/Ecology with a minor in Zoology.

Kenyon lived in Ithaca for three years before she moved to Belmont, MA where she worked for almost a year as a dog-walker. She has since settled in Nashua and is now the Office Manager here at the Hollis Veterinary Hospital.

Kenyon is pictured here with her dog, Colby. 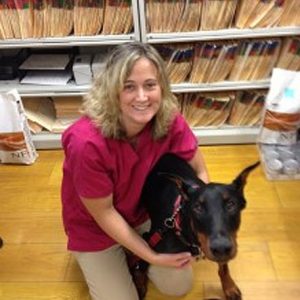 Originally from the Monadnock region of New Hampshire, Jessica graduated from the University of New Hampshire’s Thompson School of Applied Science in 1997 with her associate’s degree in Animal Science.

She has always had a passion to work and care for animals and found the veterinary field a great fit. Before coming to HVH, Jessica previously worked with Dr. Jill in Henniker for 9 years. In total, she has been a Veterinary Technician for a total of 15 years, enjoying all aspects of her job.

Jessica lives in southern New Hampshire with her husband, 2 cats, and 2 Doberman Pinschers. In her free time, she enjoys shopping, traveling, and going for walks with her dogs.

Jess is pictured here with one of her dobermans, Logan. 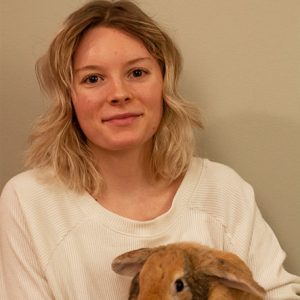 Originally from Nashua New Hampshire, Ashleigh started working with animals at a small kennel in Amherst NH while still in high school. She continued working there until she moved to Dover to attend Great Bay Community College for their veterinary technician program. While in college Ashleigh worked for Cocheco Valley Humane Society, caring for their animals while assisting technicians.

She later moved to Manchester to work at a hospital as a veterinary assistant, where she gained most of her experience in the veterinary field.

Ashleigh currently lives in Goffstown with her husband and their pet rabbit. During her free time she loves going out to eat with friends and pursuing her passion for photography. 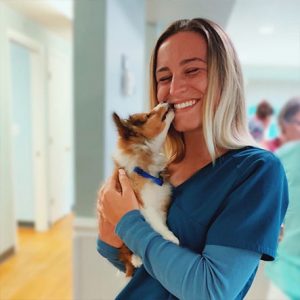 Originally from Milford NH, Alyssa got her first job with animals when she was 14 years old right here at Hollis Veterinary Hospital. She worked as a kennel cleaner for us throughout high school, before heading to the University of New England, where she obtained her B.S. in Animal Behavior.

Alyssa then moved to southern Florida where she trained dolphins and worked as a zookeeper with parrots, manatees and sea turtles.

Deciding that Florida was not the place for her, she moved back home to New Hampshire and rejoined us as a Veterinary Technician Assistant.

In her free time she enjoys pet sitting, going to rock concerts with her mother, and playing with her pet rats.